Since his arrival in Israel on January 24th and in the framework of the organization of the First International Course of the Harmony Program, the President of the ITF GM Pablo Trajtenberg carried out various activities related to the promotion of the ITF Taekwon-Do and the strengthening of the relations that The Israel Traditional Taekwon-Do Association ITF has with sports institutions from the public sphere. 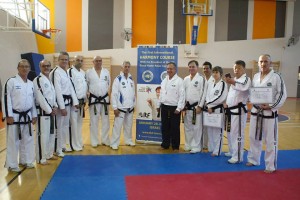 The first appointment was at the Wingate Institute, an institution that has global recognition as one of the prestigious academies where certifications BA (Baccalaureate) or MA (Master) are delivered in physical education and has several laboratories in which all the sportive activities are experienced.

The ITF Taekwon-Do entered the Wingate Institute from the hand of Grandmaster Avi Aviceedon, 10th Degree of Krav Maga and Martial Arts Manager and with whom collaborations for the future were agreed.

ITF TKD was recognized by the government of Israel in 2015 and since then, the Israeli instructors’ diplomas have the support of the Wingate Institute and the Ministry of Sports.
On the occasion, GM Trajtenberg was received by the Director of the establishment Shlomo Ben Gal and GM Avi Aviceedon, with whom he had a cordial meeting in which there was an exchange of presents, during which the President presented our ITF Programs as a significant social work.

Mr. Danny Roth and the Instructor Leonardo Oros Duek officiated as interpreters and took the opportunity to discuss all the progress achieved by the ITF TKD since being formalized and through the work in conjunction with the Wingate Institute.
During the day of Monday 25, was also special for the Matnaz Yoqneam (community center) where GM Trajtenberg was received by the students of the Instructor Leonardo Oros Duek, whom together with students from Haifa (Mr. Sergey Harchenko), Zichron Yaakov and Carmiel (Mr. Mario Cosacow) shared a seminar in which they worked over the energy in the training. 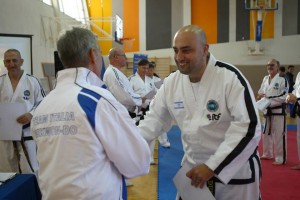 The Director Lea Fadida gave some warm words of welcome and all activity was supervised by Sports Director Tzur le Avi.

The President of the Israeli Taekwon-Do Danny Roth thanked the participants, parents and authorities of the Matnaz for their support to the International Instructor Leonardo Oros Duek who is worth mentioning, runs one of the largest schools in Israel with many successes abroad.
On Tuesday 26, GM Trajtenberg began his activities in Tel Aviv with a courtesy meeting to the lawyer of the Israeli Taekwon-Do Association Efraim Barak, who also serves as VIP legal advisor for the ITF.

It should be mentioned that Dr. Barak is also a judge in the CAS (Court of Arbitration for Sport by its French acronym) and lawyer of the Israel Football Association and Counselor for the UEFA and the All Europe Taekwon-Do Federation (AETF).

During the meeting, GM Trajtenberg remarked the achievements that have been reached in the ITF and exchanged ideas with the professional regarding Taekwon-Do as an international sport, after which all those present were invited to lunch by Dr. Barak to one of the most famous restaurants in Tel Aviv, owned by the renowned chef Haim Cohen.
In the afternoon GM Trajtenberg visited the municipality of Ashdod where he was received by Instructor Luis Sajnovetzky and the Sports Director Mr. Benny.
The GM thanked the municipality of Ashdod for the support they provide to Instructor Sajnovetzky and to the ITF TKD. Then, the GM gave a course to members of ITF Taekwon-Do coming from the south of the country. 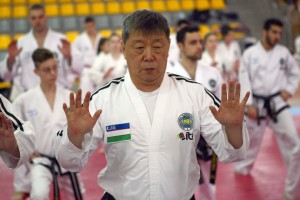 On Wednesday 27, to mark the International Holocaust Remembrance Day established by the United Nations, the GM Trajtenberg, his wife, Instructors Roth and Oros Duek, along with others, visited the Holocaust Museum in Jerusalem. This museum recalls the systematic slaughter of 6 million Jews during World War II, touched on more than one occasion, the entire delegation.

In the afternoon of the same day, after the arrival of the President of ITF Russia, Master Lazaros Tsilfidis and Luis Sajnovetzky, treasurer of TKD Israel, the group addressed the Parliament where they were received by the Director of the Ministry of Sports and Culture, Yossi Sharabi, accompanied by the Vice Director of Sports Dudu Malka.

On the occasion, GM Trajtenberg acknowledged the support that is given to ITF TKD and explained about the different Programs available in the Federation (Kids and Harmony) and anticipated that they already started working on the project of a Program specifically dedicated to persons with disabilities. 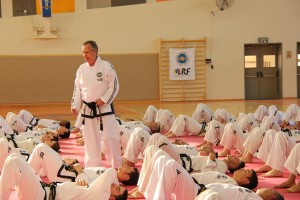 Meanwhile, and after exposure of GM Trajtenberg, the Director Sharabi committed himself to recommend the ITF TKD in community centers throughout Israel, which was celebrated by all and led to congratulations to the members of ITF Israel by the work done.
On Thursday 28, the GM Trajtenberg visited the Druze village of Dalia del Carmel and continued his tour of the Kibbutz Ein Hashofet where together with Masters Jerzy Jedut and Tsilfidis Lazaros had lunch in a very special atmosphere and they knew about the ideology of the kibbutz.

In the afternoon, and already with the presence of representatives of the different countries that were present to participate in the First Course of the Program Harmony, GM Trajtenberg, GM Bos, Master Frank Vanberghen, Master Ray Nicolaisen, Master Jerzy Jedut, Master Lazaros Tsilfidis, the President of ITF Belgium Annick van Driessche, President of ITF Nepal Chetan Rigi and Instructors Petros Mikaelyan from Russia and Mr. Pierre Sabah from France, shared and enjoyed a “barbecue” on the house of the organizer Leonardo Oros Duek.

The day came for the Harmony Program

On Friday January 29, 2016 will remain in the history as the 1st International Harmony Course.
This event in Israel summoned representatives of countries like Italy, Belgium, France, Norway, Poland, Russia, Nepal, Uzbekistan and the host country Israel.
GM Trajtenberg began the course sharing the reasons why the idea of developing a Program dedicated to older adults was born, once the Kids Program was already done and presented. 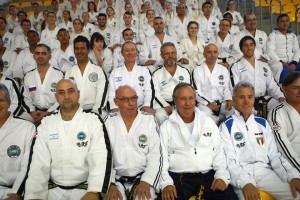 According to his point of view, the persons included in the category of Older Adult were not receiving real attention due to the misinterpretation of assuming that everyone, without exception, could participate in mainstream classes.

He highlighted the importance of developing the perception of the body and changing some behavior patterns such as how to execute the blows to prevent the joints resenting.
He thanked to his student Gaston Casero, a Taekwon-Do Instructor and Physical Education Professor, for the work done in research, compilation and implementation of concepts, after which he explained the theoretical foundation of the Harmony Program. 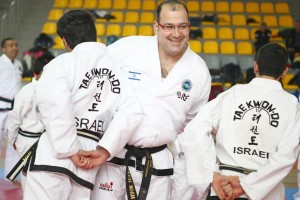 Then he gave a demonstration of basic exercises that were enjoyed by the more than 80 students who were in the Dojang and through which they could understand the need to perform the movements correctly as a means to overcoming one’s limitations through the incorporation of these exercises.
In this regard, GM Trajtenberg ceded a part of the Course to GM Bos to share his extensive knowledge by working different exercises.

Finally, as a last topic of the Course content, GM Trajtenberg explained how to teach fundamental movements and patterns to older adults.
As a close of the event, he dedicated a message to all members of the ITF Taekwon-Do in general, and in which he thanked and specifically congratulated the Israeli TKD for everything done, by the evident growth and by having achieved recognition from the Israeli government.

On Saturday 30, the Israeli Taekwon-Do invited to a tour to the city of Jerusalem as a farewell to all who visited us from abroad.
This tour that covered the Mount of Olives, the Holy Sepulchre and the Wailing Wall, left a message of harmony in all the members of ITF Taekwon-Do.
In the evening a gala dinner was held during which, in an atmosphere of joy and satisfaction at the successful event materialized, members of the Board of TKD Israeli -their President Danny Roth, the organizer of the Course Leonardo Oros Duek, the Vice President Mario Cosacow and the treasurer Luis Sajnovetzky- delivered presents to all foreign delegations that arrived from Nepal, Uzbekistan, France, Belgium, Italy, Norway and Poland, including a Candelabrum, symbol of the Israeli Taekwon-Do Association, to the GMs Trajtenberg and Bos.

In turn, from the hands of the President of the ITF GM Pablo Trajtenberg, the lawyer Efraim Barak was awarded with the Honorary Black Belt Degree and its respective diploma, for his national and international level management, becoming one of the most emotional moments of the evening.

Finally, the organizer of the First Course of the Harmony Program, Sabum Leonardo Oros Duek, representing the members of the Israeli Taekwon-Do, thanked all ITF members who supported this event and for having shared in their land, Israel, this excellent course and, most particularly, to GM Trajtenberg for trusting them.

“Harmony Course!! Fantastic time in Israel, teaching again together with President GM Trajtenberg is always a big pleasure. Thank you organizer Leo Oros Duek for taking care of us. Thank you ITF Israel President Danny Roth for being present and being close to us. Thank you Masters Frank Vanberghen, Ray Nicolaisen, Lazaros Tsilfidis and Jurek Jedut for joining us”.

“Nice memories from FIRST Harmony Program, hope to see You soon all.”

“I want to thank the President of ITF GM Pablo Trajtenberg for his confidence to make the first Harmony Course in Israel.

ANNICK VAN DRIESSCHE –PRESIDENT ITF BELGIUM
“One of those moments you realize again what a great bunch of people we have in ITF. Many thanks to Leo Oros Duek, Danny Roth and their crew for all the efforts they have done this weekend”. 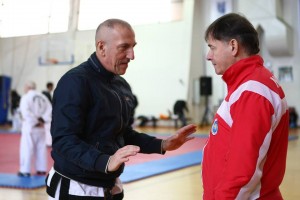 After the Harmony Course, the instructor Leonardo Oros Duek had made an appointment with the municipalities of Zicrhon Ya’akov and Hof Hacarmel, where he has joined the social service and offered the Harmony program to the mentioned municipalities.

And activities do not stop… 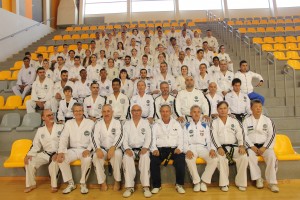 After the Harmony Course, and taking advantage of the continued stay of the President of the ITF in Israel, Instructor Leonardo Oros Duek arranged an appointment with the municipalities of Zichron Yaakov and Hof Carmel where together with the social service, the Harmony Program will be offered to the retirees of the mentioned municipalities.
On another level, GM Trajtenberg visited the Institute Susan Dalal, one of the most prestigious dances institutes worldwide, where he was greeted by his Vice-Director Claudio Kogon who kindly welcomed our President and offered to facilitate spread of ITF Taekwon-Do in Israel.