2015 is turning into an auspicious year for ITF TaeKwon-Do in Scotland, in March we were fortunate enough to host the 100th IIC (International Instructors Course), breaking UK records with more than 300 participants in attendance. 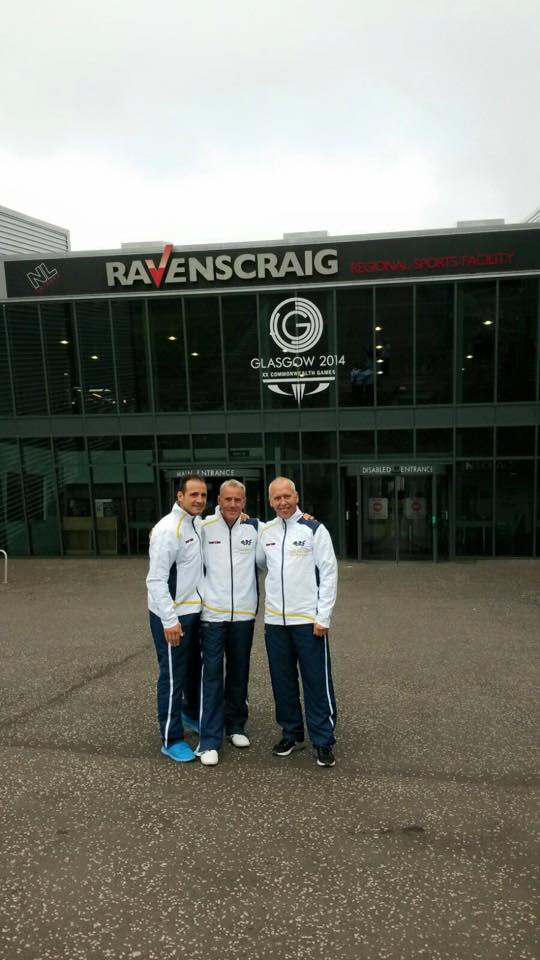 Within a matter of weeks we will also be hosting the European Championships at the Ravenscraig Regional Sports facility on the outskirts of Glasgow, the first major tournament to be held in Scotland for more than 15 years. Most countries would be happy to have organised 2 major ITF TKD events in any one-year and leave it at that but rather than resting on our laurels ITF Scotland decided to go one better.

It was with great sadness that we learned earlier this year that Grand Master Wim Bos was to stand down from the IIC’s, for a new venture The ICC (International Competition Course). Grand Master Bos is one of the most respected, inspirational and enigmatic characters in ITF TaeKwon-Do, there is no doubt he will be missed by all at future IIC’s, but we are fortunate that he is still very much with us, and putting his efforts into the new format of ICC.

and now Scotland was also playing host to another fantastic course from the ITF, The International Competition Course or ICC. What exactly is an ICC and how would it differ from an IIC ?

ITF Scotland decided that the only way to answer this question was to bring it to Scotland and find out for ourselves. There were some concerns that the timing may not have been right for this course, with many in Scotland, and the Scottish team, in preparation for the European Championship’s, in only four weeks time, would anyone turn up and take part?, we need not have worried, and our concerns were proved unfounded. 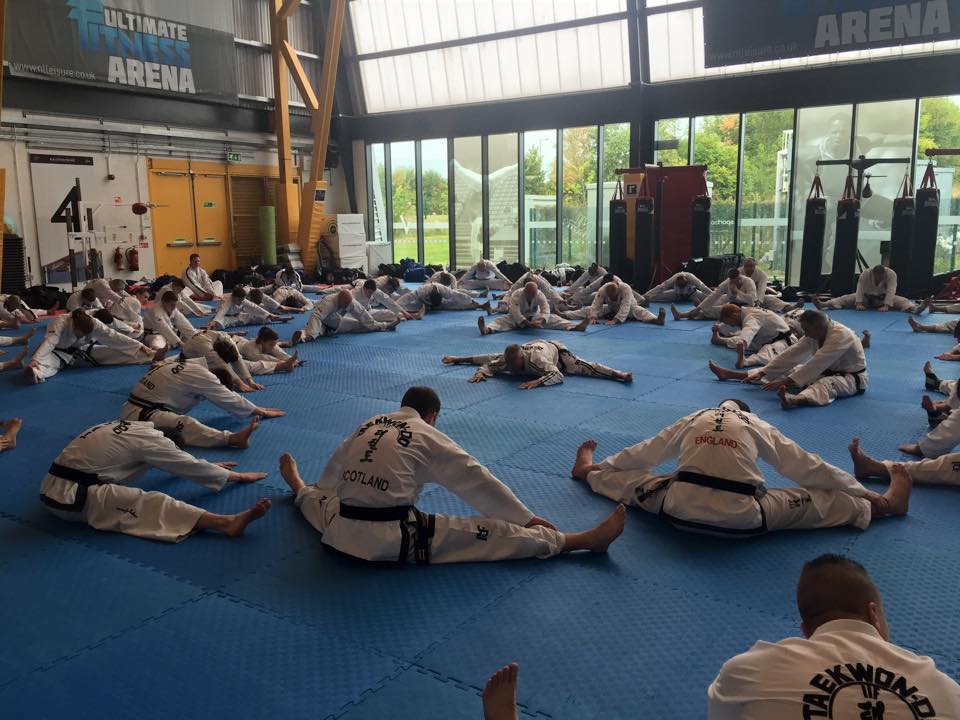 The venue for the 3rd ICC was the Ravenscraig Sports Facility, soon to be home of the 2015 European Championships, and after the obligatory inscription on the Saturday morning there were a total of 90 participants lined up on the mats ranging from 3rd Kup blue belts, to 8th Degree. 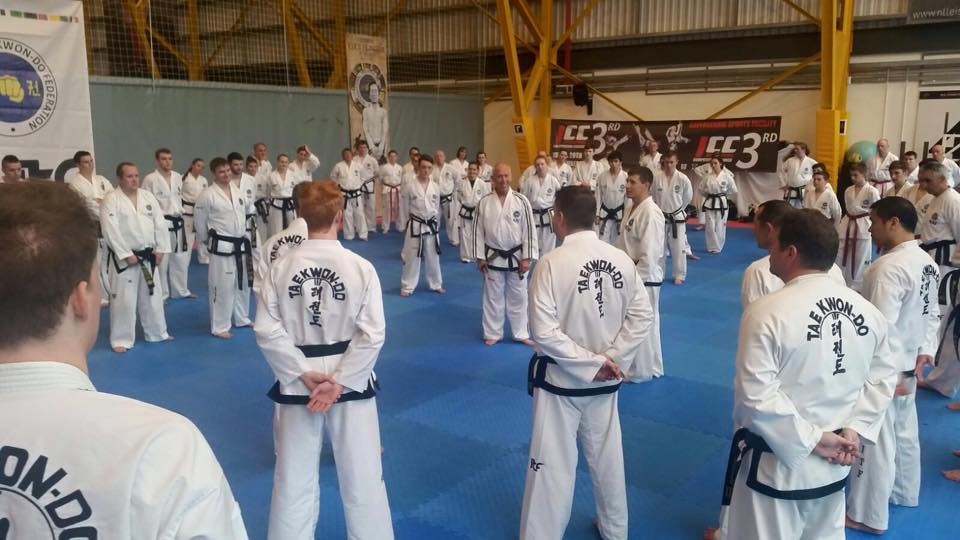 Each was given an individual introduction and welcome, followed by warm vigerous and rousing applause before Master Wallace handed the proceedings over to Scotland’s own Grand Master, Grand Master Thomas MacCallum IX Deg, who officially opened the course.

In the pre-course literature, we were informed that the course would be broken up into 4 sessions, morning and afternoon over 2 days. Each session would consist of 3 x 1 hour slots, allowing each of the Instructors one hour in each session, with a 5 minute break in between. After a quick warm up Grand Master Bos was the first to take the reigns with the remainder of his hour spent showing various stretching techniques to help improve flexibility and kicking. 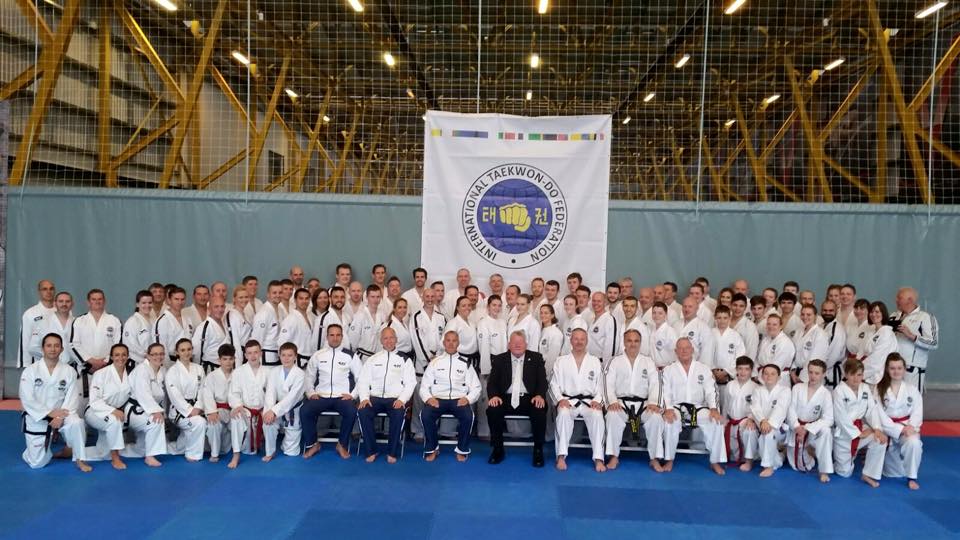 This stretching would prove invaluable for what was to come. Next was Master van de Mortel who took the group through some fundamental movements and pattern execution and finally Sabum Barada got his turn to show us some of his training methods, sparring drills and overall toughness and all of this before lunch. The afternoon session was the same order again and we covered all areas of pattern preparation and competition execution, pad and shield training methods and sparring techniques and tactics. The instructors made a point of asking ITF Scotland Squad Members that were present to volunteer themselves to the floor and show them how they could improve their patterns and their sparring. Although the instructors had their own slot to pass on their knowledge they were supported and assisted by the others who were more than happy to jump in and help out, it was obvious that they share a mutual respect and admiration for each other. There wasn’t much sitting around on the course, the handover between each Instructor was barely enough for a quick drink or snack before the next would take over. In any case everyone was having so much fun, participants and instructors alike that in most cases the hour would run over into someone else’s slot, the knock on effect being that the first days training finished an hour later than expected. 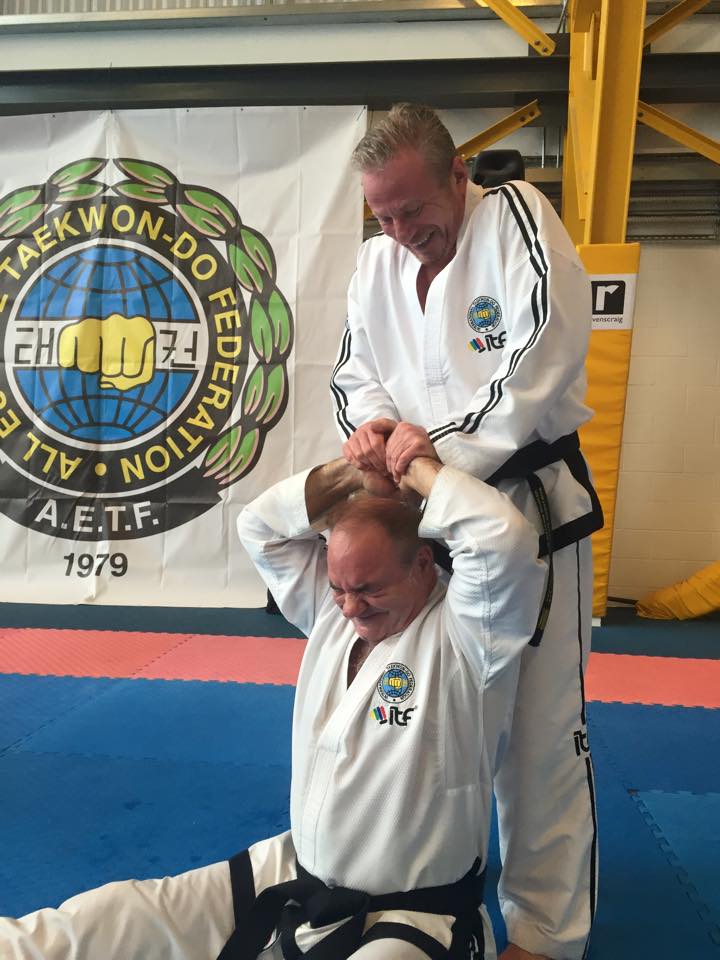 There was no official Banquet on Saturday evening but a quiet meal had been arranged at a local Italian restaurant for the Master’s, Organiser’s and ITF Scotland Coaches.

Sunday morning saw an earlier start to the ICC, the official photo was taken at 8.45am before everyone lined up and started the final day of the course. The day was spent looking at patterns and point deductions for errors, all aspects of special technique and power breaking. The day finished with coaching, conditioning and strength exercises, leg development, sparring drills and mental preparation and once again, many bouts of sparring drills and free sparring, which everyone including the Master’s took part.

Participation certificates were handed out before closing remarks and speeches by Master Wallace, Grand Master Bos, Master van de Mortel and Sabum Barada. Gifts were exchanged, the instructors were very happy to receive their Scottish Shortbread but overjoyed on receiving their 3rd ICC t-shirt. Grand Master MacCallum officially closed the course before final photos and departure.

In closing I should like to add a few words, I’m a veteran of many IIC’s, as I see them are a necessity for any instructor wishing to improve his or her knowledge, understanding and ability of ITF Taekwon-Do. Over the years I’ve watched the IIC’s develop mature and grow, they allow discussion for the advancement of our art.

I am an instructor, and an international umpire, my competition days are behind me now, so one might ask, what need is there for me or anyone that does not compete, or no longer competes, to take part in an ICC ?

In short, it is for those very reasons that I would recommend this course to anyone. Everyone on this course gave it there all, no one sat on the sidelines, everyone worked hard, sweated profusely, but most importantly, had fun, while learning new drills and sparring techniques, and everyone left the course with a re-invigorated buzz about what we do in ITF Taekwon-do. It was a bonus, and honour and a privilege to spend the weekend with Grand Master Bos, Master van de Mortel and Sabum Tomaz Barada, who were more than happy to share their knowledge and experience for the benefit of everyone, with nothing held back.

At the end of the course we were asked to fill in a questionnaire and make suggestions on how the course could be improved, after giving it some thought my only recommendation would be to take a towel and extra doboks, if you don’t sweat on this course, you never will.

Many thanks to Mr John MacIlvaney VI Degree and Mr David Condie V Degree, for bringing the ICC to Scotland, there are already plans for an England ICC which I am confident will be a great success, and I can only see this course going from strength to strength over the coming years, as more and more people hear about how good it really is..