Dear ITF Members!  In addition to the already published report on the ITF website about the fundraiser for Kemal Kasim Mohammed I would like to inform you about his orthopaedic care. After the completion of several formalities (eg. credit check, travel health insurance and liability insurance), the German Embassy in Addis Ababa issued the visa for Kemal to enter Germany. On Monday, February 09th 2015, he arrived in the morning at 07:00 o’clock at Frankfurt International Airport and from there we drove by car to Cologne. In the afternoon there was already the first appointment at the rehabilitation center Bush in which the orthopaedic technician, Mr. Ferdinand Danish, was able to meet Kemal for the first time. The thigh was examined and a plaster cast was created. On the same evening Kemal took part at the TKD training of Master Harry Vones in his dojang with great enthusiasm. The following days were packed with activities and appointments, with a “culture shock” occurred for Kemal: Snow, cold, a tram (to name a few things) were absolutely new and unusual for him.He also saw for the first time in his life the “Street Carnival in Cologne” and he clearly enjoyed it. 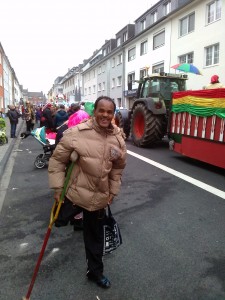 Other activities were: – Zoo visiting- Visit to the football – Bundesliga match 1.FC Cologne – Hannover 96- Sight Seeing of the city of Cologne ( visit to the Cathedral )- eating out at a Ethiopian Restaurant- Gym In addition, the following training sessions were completed : – Training with Master Walter Komorowski at JC Langenfeld- Training with GM Kim Lan Ung at Budokan Dortmund- Training with GM Rolf Becking at fitness center Stonjek- Training with Instructor Sven Heinrich at TC Dellbrueck- Training at ITF club in Brussels 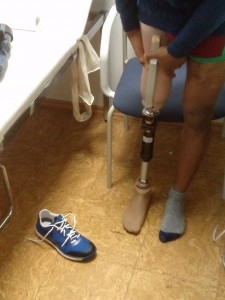 Kemal took the opportunity at the training sessions to thank for the donations that have made possible this whole action at all. He performed his pattern and showed how he managed the training despite his physical handicap. Herewith he was a great example and motivation for children, adolescents and adults. Between these activities there have been meetings with the orthopaedic technician , who had to start constantly new measures to find the optimal solution for the prosthetic leg for Kemal. The result can be seen below. 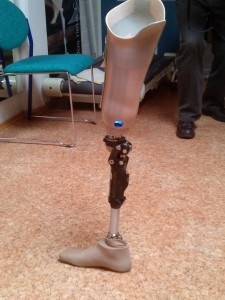 On Saturday, March 7th 2015 Kemal returned after 4 weeks in Cologne back to his homeland and arrived there safely on Sunday morning. His task is now to practice walking with the prosthetic leg because his right side of the body was not burdened evenly over the period of 22 years. His body ( muscle groups , ligaments, tendons and joints, spine , etc.) and also his brain have to get used to the new movements and have to automate them . With the prosthetic leg he now has a good chance of finding a job that was previously denied in many areas. From the donated € 9,716.73, € 7,502.69 has been paid for his flight to Germany, the prosthetic leg and other costs. The rest of the sum = € 2,214.04 shall be spent for Kemal so that he can come to Italy for the World Cup (hotel and flight). There he can show a TKD demonstration and thank our TKD Family for the fund-raising.