As highlighted by the World Health Organization, October is the month of breast cancer awareness.

This awareness campaign that is carried out throughout the world every October, “contributes to increase the attention and support given to awareness, early detection, treatment and palliative care,” according to that Organization.

Each year there are 1.38 million new cases and a high number of deaths due to this disease and it is, by far, the most common type of cancer in women, both in developed and developing countries.

Unfortunately, current knowledge about the causes of Breast Cancer is insufficient, so early detection remains the cornerstone of the fight against this disease. When it is detected early, it is possible to establish an adequate diagnosis and provide a suitable treatment, which is why the chances of cure are high. On the contrary, when it is detected late it is rare that curative treatment can be offered.

As such, and in line with the programs promoted by WHO, the National Taekwon-Do Association of Puerto Rico, decided to join the global campaign as a way to promote prevention and early detection through an original proposal.

Thus, at the initiative from two of its members, the Sabum Gabriel Candelaria Ruíz and the Boosabum Doriliz Perez Corujo, Masters, Instructors and students of the centers belonging to the AN of Taekwon-Do of Puerto Rico decided to replace their degrees with Pink color belts in favor of this Campaign and as a demonstration of support to all the people who have gone through or are going through some experience around this disease, whether with family or acquaintances.

On the other hand, all the money raised by the sale of pink belts and other activities carried out during the October’s month, will be donated to the American Cancer Society of Puerto Rico, an entity what offers free programs and support services for people with cancer and family members destined to understand the disease and, fundamentally, who receive emotional support during periods of treatment and recovery.

Without a doubt, initiatives like these are those that demonstrate the deep level of commitment of the National Associations that make up the ITF, in transforming Taekwon-Do into a tool for social development and improving people’s quality of life. 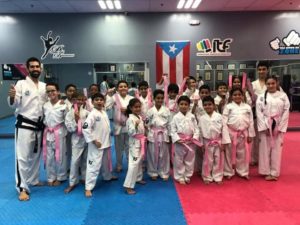 Congratulations
Next Post: A new step of the Development Team in Africa. This time in Tanzania.