The event set a new record with 14 participating African Nations;

There were also umpires and officials participating from 8 non-African countries; Canada, France, Germany, Italy, New Zealand, Russia, Scotland and Sweden making it all together an truly international event with participants from 22 nations.

The first day all the pattern divisions was held in parallel with the Dar es Salaam Kids Tul Challenge to get the new generation of ITF competitors a change to experience the atmosphere of an international blackbelt event.

In the 6th African Cup booth women and men competed in patterns with divisions up to 4th degree showing skills of international level as the best from each country had the opportunity to participate.

The price table with individual medals and trophies for the overall winners.

The second day of competition offered many nice sparring matches where great skill and spirit was displayed and the umpires was very happy with the high level of sportsmanship in between the competitors that cheered each other and where the larger teams from Tanzania, Zanzibar, Ethiopia and Senegal often helped to coach coopetitors from nations that could only send few participants.

Over 30 female and male participants also competed in Power using an electronical power measuring pad to safely decide the four best competitors in each class.

Both earned two gold medals each in both Pattern and Sparring.
Trophies are given out by two members of the ITF African Development Team Master David McNairn Scotland and Sabum Elena Shutova – Russia.

The best 9 out of 14 participating nations.
Tanzania received the highest number of medals but as the Gold medals counts first the best nations where Ethiopia, Zanzibar and Tanzania.

Congratulations all teams for your successes and your gained skills and knowledge. 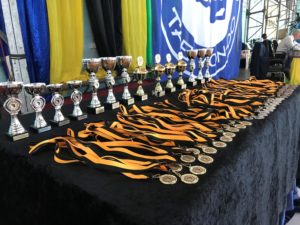 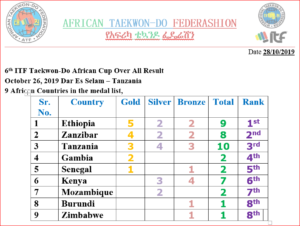 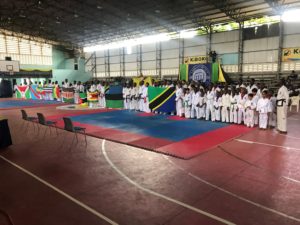 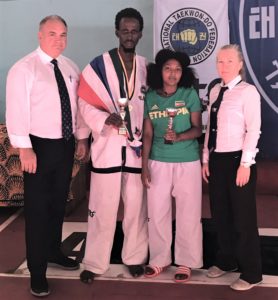