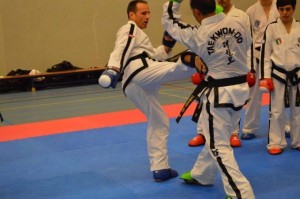 The atmosphere before the official start of the first International Competition Course was quite relaxed. There was time enough to catch up with old friends, who came literally from all over the world, but there was also a bit of excitement, what to expect from this new ITF initiative? 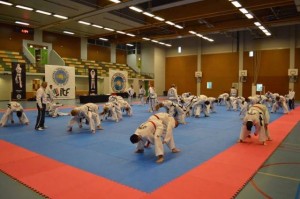 After a short and warm welcome by Grandmaster Bos, the ICC committee was introduced: Master Jerzy Jedut, Master Willy van de Mortel and Sabum Tomaz Barada were the ones who would, together with GM Bos, conduct this weekend. The whole ICC would be divided into several different ‘seminars’; an hour of sparring followed by an hour of hosin sul, followed by an hour of pad training and so on. 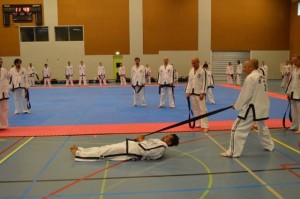 Master Jerzy Jedut kicked the first ICC off with almost an hour of funny and exciting games, showing other ways to warm up and getting focused. After a short five minute break, it’s was time for the next part. 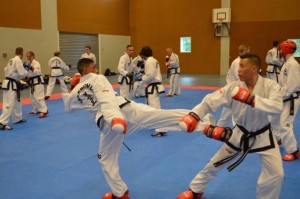 During the whole ICC the group was mostly divided into two groups, Master Willy van de Mortel now started teaching self defence, at the same time Sabum Tomaz Barada started with his specialty, sparring. Both started with ‘advanced’ basic exercises, looking simple, but very effective. Slowly the exercises were getting more complicated, but still focused on learning and having fun. 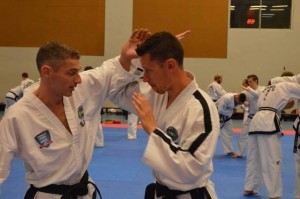 After an hour the groups changed places, so the participants who first did sparring with Sabum Tomaz Barada now got to learn more on hosin sul with Master van de Mortel. 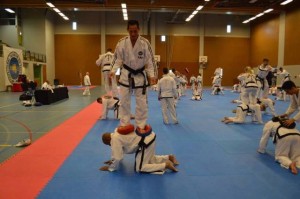 The afternoon started almost the same but slightly different as the morning session; Master Jedut warmed everybody up with his huge arsenal of games and excercises. Fun was the keyword, which didn’t meant it was easy! Sabum Tomaz Barada started with the second part of his sparring seminar and Master van de Mortel showed how you could train effectively on the pads. Of course everybody has to work – and sweat – hard. After this hour, the same routine as before, change groups and do it all over again! 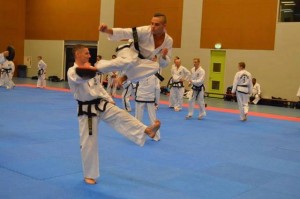 The day started early, but Master Jedut made sure that everyone was awake. Before we knew, the first hour passed and the second started with basic exercises on how to improve our jumping. And, of course, the skills of our own students. Sabum Lilian Doulay showed some impressive jumping, after this we could try it ourselves…

Next part was conducted by Grandmaster Bos. First he thoroughly treated the whole procedure – and background – of breaking at tournaments. After this interesting insight it was time to practice all technics as how they are performed during tournaments.

The next session it was sparring time all over again, Sabum Tomaz Barada continued his earlier sessions on a very inspiring way; if your basics are good, it’s time to move on to the next level!

After the lunch break it was, of course, GM Bos who showed and told the participants all ins and outs of stretching. Main goal was how to do this in our own schools and make sure students are getting more flexible and not getting injured.

Unfortunately patterns where not part of the program during this ICC, but a lot of fundamental exercises were treated on a original and inspiring way by Master Jedut.

The very last hour of the ICC was optional, one could go sparring with Sabum Barada and Master Willy van de Mortel (and Sabum Stephen Tapilatu!), do more fundamental excersis with Master Jedut or, this was especially for the higher graduates, join a session with GM Bos about the ICC and it’s future.

Long story short: the ICC was a very intense and instructive weekend, with lots of fun and a really good atmosphere.